A long review of a mediocre movie. 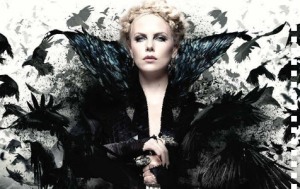 Snow White and the Huntsman is an appropriate name for this movie, since that is all we know about either character.  She is Snow White.  He is the Huntsman. The only person with even a little bit of character development is the evil Queen Ravenna, who is obsessed with Hollywood-standard beauty and youth.  Ravenna hates all men except her brother; in her eyes, men use women until they are old and ugly and then replace them with someone younger.  In true “You Become What You Most Despise” fashion, the queen must literally consume the life of young girls to stay young and beautiful.  There is an obvious parallel to our contemporary culture, and Charlize Theron spends much of each scene chewing the furniture, but with depth in short supply, I was eager to gobble up even the slightest hint of motivation.

The beginning takes us through the familiar story with a few twists.  The King and Queen live in harmony, and they have a daughter who is super pretty.  Once the Queen dies, the King finds a totally hot babe “captured” by some mystical shard-guards (Ravenna), and then he marries her.  Ravenna kills the King, locks up Snow White, creates a blight on the land, and then discovers that consuming Snow White’s heart is the key to remaining young forever.  Luckily, Snow White escapes into the Dark Forest, where everyone else is afraid to go.  (Sort of… mostly their horses get stuck in some quicksand-mud on the outskirts, so it is unclear whether or not they would have followed.)  The Queen finds the only person in existence who has travelled through the forest, and since the only thing we ever learn about this Huntsman is that he misses his dead wife, she offers to bring his wife back in exchange for Snow White.

Inside the forest, Snow White encounters some beautiful and slightly ominous foliage and some shadowy Dementors or Ringwraiths that we never see again.  She then inhales some spores and passes out.  When she wakes up, the Huntsman is leading the Queen’s brother and a group of no-name soldiers to capture her.  The movie burns through all of the conflicts it sets up pretty quickly.  Snow White hides from the Huntsman, and he finds her within seconds.  The Queen’s brother immediately reveals that the Queen was totally lying about that whole bringing people back from the dead thing. The Huntsman reacts exactly as we expect him to: he protects Snow White, fights all of the faceless henchmen, attempts to abandon her in the forest, and then, for no discernible reason, agrees to lead her through the forest.  There is one brief moment of danger when Snow White walks into a cluster of snakes, and another when they encounter a troll on the bridge leading out of the forest, but Snow White Caesar Milans the troll into submission through her mystical connection with nature or something, and they leave.

Even worse than the pacing is the lack of development or cohesion among the disparate elements.  Yes, everything is very pretty, but the prettiness doesn’t mean anything.  For starters, I’m not sure what the Dark Forest is.  I get that it is a forest, and it is dark and perhaps dangerous, but why?  What is the mythology of this forest and how does it fit into the rest of the world?  Is Snow White truly in danger here, or could she pass through unharmed?  She needs to be saved from the snakes, but she is able to control the troll since she is the embodiment of innocence and life and all that.  It makes no sense.

Sadly, the movie just ignores these questions altogether.  It seems more concerned with moving us quickly (and then obnoxiously slowly) through re-imagined scenes of the fairy tale.  It also doesn’t mind borrowing copiously from other movies, including Tolkien dwarves, the Princess Mononoke grove with forest spirit, and a Never-Ending Story-esque loss of a horse in a quagmire. Much of the movie I spent waiting for each recognizable element—ah, there’s the mirror, there’s the poisoned apple, and of course, the kiss from the prince is (surprise!) the Huntsman. Bet you didn’t see that coming!  Actually, I didn’t, since there was no time spent on any blossoming romance between them.

There were also some opportunities for true darkness, but what this movie fails to realize is that darkness needs context to mean anything.  True darkness is not just absence of light, but it is watching characters confront powerful external forces that often represent our own fears or tendencies.  Obviously the Dark Forest was a missed opportunity.  But take the fishing village, for example.  The women there have scarred themselves to avoid the Queen’s gaze.  That’s pretty cool, but really, the scars are old, well-healed and perfectly straight lines on otherwise gorgeous faces.  How about true disfigurement?  Something that makes the audience (and possibly also Snow White, the most beautiful of all) uncomfortable to look at?

Finally, blissfully, we reach the end of the movie, where the roused Snow White delivers a stirring speech to a group of ragtag outlaws in her nightie.  At this point, the movie seems to forget that she is supposed to be the embodiment of innocence and virtue.  She dons some armor, leads everyone into a bloody battle, and as her protectors are fighting some animated shards of glass, she stabs the Queen with her dagger.  What would have been an interesting twist is to see her not heal the land, as she is no longer the embodiment of innocence. (She totally just killed a bitch, after all.)  Once the Queen is dead, Snow White looks into The Mirror, and since it is a burnished shield, I got the sense that there weren’t many mirrors in this world.  How cool would it have been if this was the first time she had seen herself, if the sight of her own beauty changed her?  Does innocence always become experience, and is experience always corrupting?

I guess we’ll never know.  In the end, some flowers start growing, which means the kingdom is healed, blah blah blah. What this movie really needed was a purpose beyond re-imagining every single element from the original story. (Instead of being green, the poisoned apple is now… furry.)  One movie that seems to have accomplished this, oddly enough, is Amanda Seyfried’s Little Red Riding Hood.  Since I’m not a fourteen-year-old girl, I didn’t see the movie, but the trailer seems to have captured the whole coming of age, societal expectation of purity and virtue vs. sexual experience angle.  Of course, it does so with obvious color symbolism, Amanda Seyfried’s doll-like sexuality, and werewolves.  Still, that sort of thing better approximates the point of fairy tales, especially our modern interpretation of them.

If only Snow White and the Huntsman could have pushed the whole beauty/youth/innocence/experience angle a bit further (and maybe developed more than one character), this could have been an interesting movie.  As it stands, it is pretty but empty, just like Snow White.